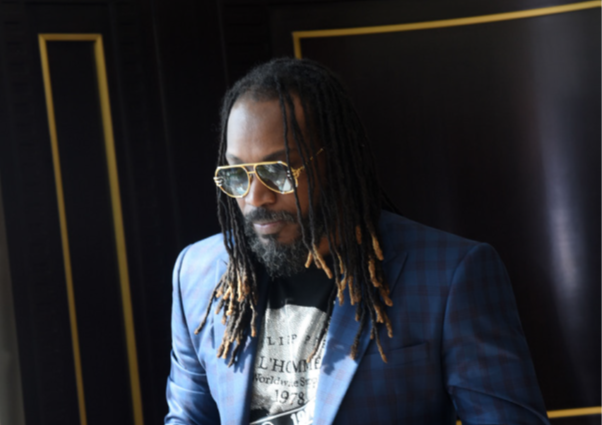 To be honest with you, people see me as ‘The Universe Boss’ based on what I have done and achieved in cricket. People have many versions but in reality, I gave myself the term ‘The Universe Boss’ when I realised what all I have done and how much I have done, on ‘and’ off the field. And I also believe that I’m the only cricketer to do these many things in a particular manner. And therefore I decided to come with a new and peculiar term; something that would resonate with me and imply conquering the world and so took the birth the phrase ‘The Universe Boss’

2. How were you when you were growing up during your school life?

Well, starting off with primary school, I wasn’t a total cricket buff. I used to love playing other sports as well, football being one of them. I played a lot of football, even though my high school with the under 14 & under 16 categories. But it was getting too strenuous for me with that entire running and training. That’s when I decided to switch to cricket.

And then, just like that, cricket became my priority in life. Before I knew it, I was scoring centuries at a very young age already. Other than that, I was a pretty quiet kid in school. And even now, as might know, I don’t give a lot of interviews. That’s just how I have been since I was a child. But I’d like to think that I’ve grown up a lot. I’ll surely say that captaining teams

was something that really assisted and helped me to snap out of my shell.

3. What is your secret diet regime you follow that keeps you so fit at 41?

People only believe what they see. And I know a lot people talk about me because of my social media, assuming I’m a party animal but they really don’t know the real deal. All that isn’t true and when I work out, I give it my hundred percent. It’s very important for me that my body gets the rest it needs. I make sure I sleep for 8 hours so as to heal and relax. I also try to take in a lot of fluids and keep myself hydrated. Frankly I don’t eat too much now, perhaps 1-2 meals per day. And because I sleep late at night, I prefer to sleep in through the next morning.

As for my secret diet, it consists of hard-core Jamaican food. I love Jamaican dishes. ‘Eat healthy, keep healthy’ is a phrase I always follow.

4. What’s your opinion on superstitions practiced by sports men? Do you practice any specific rituals before going to the field to bat?

Not really as such. I don’t believe much in superstitions and I don’t follow any rituals. Sometimes maybe I’ll play a shot and perhaps walk backwards. You know there are some things that you do on the field that kind of get stuck with you and then somehow later, they become a part of you. A lot of sportsmen have superstitions that they follow. You see what happens is that when something has worked you; you don’t wish to take a chance and change it. You’d rather stick to it and repeat that in your future routine. No harm right?

5. What advice would you give to today’s young cricketers?

I see most of the youngsters are tuning into T20 and not much into test crickets and ODI anymore. To all the budding cricketers, I’d like to bring to your notice, how much opportunity there is in this sport. Trust me, if you’re really serious about it, then it can be a life changer for you. It has changed so many lives globally already, hasn’t it?

Secondly, don’t think that it’s impossible to make it to the top. I’m not saying it’s easy and that it’s not hard. You have to give it your best but that’s a necessity if you wish to be on the top in anything. If you want it, you believe in yourself and then go get it. Of course sometimes you will doubt yourself and instead of moving forward, you’ll take a step back. Ok. But don’t turn your back on the game. Just don’t give up.

6. Is there something interesting you’d like to tell us about IPL 2020?

Let’s just start by saying it’s done and dusted. Initially, I was a little agitated but I kept my composure. And when the time came, we delivered. It was great working with the team but alas, a disappointing and unfortunate loss. However, it was good given the situation aka the pandemic. It was something new altogether, playing without our fans, without the sounds etc. It was a whole new experience for everyone and for me personally. IPL and the Dubai government did a great job keeping all of us safe and taking the necessary precautions. So it all worked out really well and we were all looked after. Hopefully, next year we can have our fans back with us too.

7. Lastly, though we wish you never retired but if and when you do, what is that dream project you’d like to peruse then?

There are still a couple of years left for that but I know already that it’s going to be something business oriented. I’ve tied myself up in a few businesses already and I also have my own record label so music is definitely involved for sure. I really do enjoy music. And during the pandemic, I’ve also learnt some new things altogether that have been fun so, who knows? We’ll see how things pan out.