Gautam’s personality has a rhythm so does his work.
Poet by nature, Gautam is a born artist. He loves paintings &amp; himself is a colourful person who likes to deal with colours of dreams. He is madly passionate about his profession is always fighting for a better unique design solution. ‘Sensitive, Humble and Crazy. These are some qualities that set him apart. His interest is in travel, people and different cultures that help him settle in all conditions this attitude makes him, GLOBALLY LOCAL, as he likes to call himself. His works have been published in multiple Indian and foreign magazines, he has also won awards for his architectural works, Interior Projects and Installations, His Interviews, blogs and articles are published on many web platforms, he has also been invited as a Jury for prestigious Indian awards for student’s architecture or NASA. He has conducted various workshops and has been invited to speak at various architectural colleges and interior designing institutes,

conventions and webinars, where he likes to interact with students and fellow professionals.

He owns two architectural studios by the name “GGAEC” along with his wife
Ar.Geetanjali Naik and another” The Zone Projects Pvt Ltd” both in existence since the last 14years. He did his graduation from S.P.S.M.B.H.S, college of Architecture from Kolhapur.
His Journey in these years has taken him into various spheres of design.
A few people know that he has also worked on designing  Film Sets of the Movies
Swades, Jodha Akbar, Mari Gold as a set designer in his early days as an Architect
when he was working as an assistant production designer to Mr. Nitin Desai, He has designed sets for prestigious Awards and exhibitions, the most recognised one being the Moving Museum of TATA empire organised during the TATA centenary year titled- ‘ TATA CENTURY OF TRUST’ which went to 16 cities in India, and 3 countries, as an Exhibition designer with SHOBIZ EVENTS for which he has received  A personal letter of appreciation from non-other than Mr.Ratan Tata himself. So this is our visibly colourful Ar Gautam Naik. 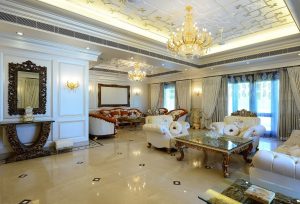 We as Architects are exposed to endless possibilities and opportunities to explore
architecture in its varied styles, patterns, functionalities and scales, with a practice of one and half decade, we have emerged as a celebrated Architecture studio, with wide range and variety of projects all across the country and abroad, we have accomplished wide range of projects in health care, hospitality, institutional, Office spaces, master planning, retail and residential category.
Our projects are widely published and we have won prestigious awards in many
categories, may it be a  farmhouse mansion designed on the lines of a palace with a classical style at Delhi which got recently featured by Vogue, or an Installation  Soney ki Chidiya which won us a national prize by IDAC, or a 1000000 Sqft mall and Township Destination One project which is the biggest project of Nasik city which won us prestigious FOAID national award, or a vacation home Bungalow with contemporary minimalistic architecture at Lonavala, or office premises designed for Shell petrochemicals research facility at Bangalore with a carpet area of 500000 Sqft and many high-end residential apartment interiors that we have designed for our esteemed clients all across the country.

What makes us a Game changer is a fact that we believe in diversity as we have
explored varied stories of style, form, culture, region and purpose through our
Architectural practice.

Our studio GGAEC seeks two basic targets as an Architecture practice, always strive to achieve excellence, and work towards seeing a sense of fulfillment in the eyes of our client.