Share
Facebook
Twitter
Pinterest
WhatsApp
1. How did the idea for your Elite CEOS business come about?
When I turned 22 years old that’s when I decided I was going to leave school studying petroleum engineering and go all-in on building my business. I felt a natural place for me to start was in the fitness niche because I had played sports my whole life, done fitness modeling, and knew the ins and outs of nutrition. From 22-25, I really struggled to learn marketing and sales, but finally, at 25 I had my breakthrough. After implementing things I learned through trial and error, I hit a million dollars in gross revenue doing online fitness coaching. Lots of trainers started to notice what I was doing and asked me for my help because they wanted to replicate the success I was having. That business hit a million dollars gross revenue in 3 months, which led to people outside the fitness industry asking me for help also. That’s when elite CEOs was born and has been running strong to this day. I never thought I would become a business consultant but it naturally progressed that way. People want to know how successful people become successful and so it was a very natural progression.
2. How do you generate new ideas?
There are a few ways to go about this. The first and most obvious way is to simply watch what others are doing. As I see ads on Facebook and posts in Facebook groups it gets my mind going on similar concepts that I can bring to my business and my market. The second way is my team. As you grow and surround yourself with people smarter than yourself you’ll want to lean on them for guidance and ideas as they start becoming closer to the pulse of the business while you continue to become more and more removed. The third way comes from simply sitting and thinking. People will underrate the effect of sitting in silence with your thoughts and coming up with creative angles and ideas that will grow the business in ways not yet in motion.
3. What piece of advice would you give to college graduates and others who want to become entrepreneurs?
My natural inclination would be to say “just do it” but I feel I have a very high pain tolerance and can handle a lot more adversity than the average person. Firstly I’d say, if you can’t handle criticism, setbacks, and feeling depressed at certain moments, then entrepreneurship isn’t for you. People interview me now and ask about my story because of my recent success, but nobody cared when I was failing, living in bad apartments, and driving 17-year-old cars. It is never easy to create a level of success unfamiliar to most people or the “top 1%” as they call it. Humans naturally put down others who are doing more than they are because they’d otherwise have to accept the fact that the only reason they aren’t successful is that they weren’t willing to do the work. Society will justify their situation with any excuse they have so that they don’t have to feel bad about not accomplishing what someone else has. If you can handle all that on your way to success then you should do it.
The second would be to hire someone. Information is everywhere but it’s the execution of the proper information that matters. Simply googling how to start a business will leave you with hundreds of thousands of results, but with little to no direction. Most of the coaching I paid for was not the best it could’ve been but it had enough right pieces in place that I was able to guide myself to use the good parts and figure out the missing pieces. You will move much faster simply by hiring someone and following their instructions than trying to figure it all out on your own. In the end, the investment you have to pay is worth it. If you don’t have the money, figure it out and become resourceful.
Finally, I’d say you have to have a deep reason about why you want to make a lot of money. The materialistic things may drive you initially but they will never be enough to keep you going long term. Make sure you have a deeper reason for wanting to be successful other than just buying nice things, it won’t fulfill you in the end.

The thing I enjoy the most is using my money to do good for others. 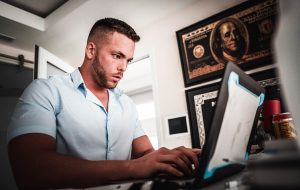 4. How many hours a day do you work on average?
I typically will work from around 8 am to 7 pm after I’ve meditated, read, and hit the gym in the morning. Some days I will stop around 5 or 6 if I have a dinner or date planned, but other than that I’ll work because I enjoy it and there are always a million things to be doing. One of my greatest strengths has been outworking most individuals.
5. Do you believe there is some sort of pattern or formula to becoming a successful entrepreneur?
I think so. It sounds cliche but the people who succeed simply never quit. The way I see it is unless you have a real mental handicap, there is no reason to keep making the same mistakes over and over again. Every time you make a mistake, that should bring you 1 step closer to your actual goal. All I did as I was trying to figure it out was listen to those I hired, made educated guesses around the things I didn’t know or weren’t working, and then adjusted until it all came together. I never made the same mistake twice because when something didn’t work I crossed it off and moved on.
If you never give up and continue to use reason and logic it is very hard not to win. The people I see lose simply can’t tolerate the feeling of loss and hopelessness that comes with a lack of success, and finally give up and give in.

WARDROBE IS THE NEW BOUTIQUE With Benafsha Soonawalla

Join our Newsletter to recieve the latest promotion and updates