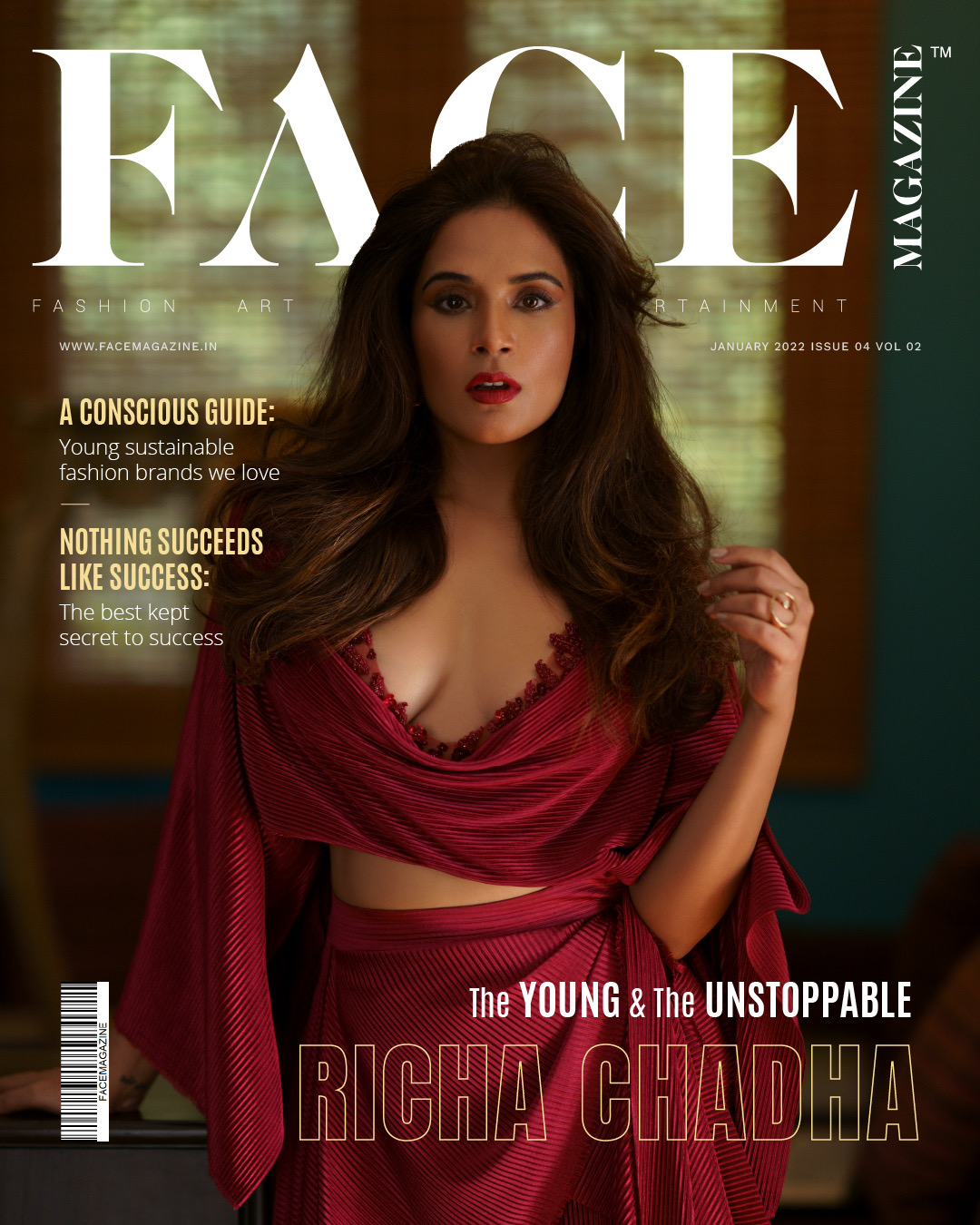 She has delivered several power-packed performances throughout her career. Her filmography is a matter of envy. Her roles in films and in her OTT outings have been extremely well-received among cine-goers and critics alike. She has always been admired for her choices be it her films, the characters she plays or even her personal life.

Face’s Managing Editor, Neha Sachar Mittal caught up with the internationally acclaimed actor  – Richa Chadha on Life on and off-camera.

1) Richa you are perceived as an ‘actor with an opinion, a ‘thinking actor’, and yet, the kind of roles you do are a mixed bag. Does your real and reel life persona ever clash?

I think everybody has an opinion. Some don’t share it and some do. And I think it’s good if I am perceived as a thinking actor, because an artist has to hold the conscience of society together. If the kind of roles I do are a mixed bag, that’s only because no one can do only one type of thing forever. Sometimes the commercial films and I do have a certain context, and I look forward to mainstream-izing the theme of them. Like last year, I did ‘Madam Chief Minister’, released in January and it was a commercial film made by a commercial director, produced by a commercial Banner, but the context of it was something that was offbeat. The film was trying to say something, so everybody has to have diversity in their filmography. You do all kinds of things,  that’s what I do too. Because at least especially in the beginning of your career, you don’t have much of a choice when you were an outsider in the Hindi film industry.

2) You once said that OTT is the present, future and will continue to evolve. Do you think OTT has given even established actors a new lease of life?

Actors who were established get better roles on OTT, where the burden of the show rests on their capable shoulders – like Shefali Shah, Arjun Mathur, Jaideep Ahlawat, Shahana Goswami.

3) You continued to work relentlessly even when the world had hit a temporary pause. What drives you to keep going?

I am very grateful that I had a lot of work to do even when covid happened, because I think even though society terms artists to be a non-essential category. I definitely think that it’s a very honourable way to live when you’re sort of spending your time, creating things that will entertain people. Yes, they called artists non-essential but when the lockdown happened, everybody was glued to their screens watching things that we had done watching us entertain them via music, films, series, poems and via so many things. So yeah, I’m grateful that I continue to have diversity of work and that has continued, touchwood!

4) Tell us about your next OTT release – Six Suspects?

Our next OTT series is based on the book Six Suspects, but the show is called ‘The Great Indian Murder’. It’s a brilliant page-turner of a book that has been translated and adapted for the series format by Tigmanshu Dhulia and Vijay Maurya – two of the best writers around. It’s going to be a fantastic show, not only because of the direction and the storyline, but also because the cast is superlative.

5) If the grapevine is to be believed – you would be seen in Sanjay Leela Bhansali’s debut web series “Heera Mandi”… can you throw some light on this?

I don’t comment on things, unless the paperwork is locked or unless it is a public announcement. 🙂

7) Your Production house is very interestingly called “Pushing Buttons”. As an artist what kind of buttons do you intend to push?

More than anything, I think I just want to push the envelope and raise the bar. That’s it. It’s called pushing buttons because that is the name that Ali and I came up with together, and we own it in a 50-50 partnership and we are very proud of some of the things that we are doing there.

8) Your first Production – ‘Girls will be Girls’ was the only Indian script invited to the prestigious Berlinale Script Station 2021. How does that feel?

Yeah! This went to the Berlinale Script Station. I have a huge amount of belief in my director and writer Suchi Talati. I think she has a brilliant new voice, which is very sane, and yet playful. And I think she will be a director to really watch out for, in the future. We’ve also won the prestigious Cinemas Du Monde from the French government. So this already is making waves, though we are six months away from even filming it.

9) In an industry where everyone believes in keeping their love life a secret… you have always owned up to it and have never tried to hide your relationship with Ali Fazal. Do you

I think this was true for people a while ago, but now everybody’s fairly public about their relationships. That is the nature of social media too. When you’re with somebody, or when you’re living with somebody, it gets more and more difficult to sort of hiding, and I saw no reason to hide it. Actually, this change started, maybe about 4 or 5 years ago, before that, actresses were told to keep their love life secret, etc. But now I think everyone is very very open about who they are romantically involved with and I don’t think there’s anything wrong with that.

I do want to party because I think now more than ever, we need to celebrate love. Unfortunately, I don’t have a date yet because our schedules are busy and this lot needs to be sorted out, and every time we think of planning something, a new variant of covid appears.

Music has emotions, Diljit Dosanjh adds those to the cover of Face Magazine.