What gives you the initial confidence that humor could pay the bills?

Well, none of us thought that stand-up comedy in English was a legitimate carrier
option, say in 2007- 2008. There were a handful of people, Vir das, Papa CJ, Ash
chandler, just a few of them who have done it because comedy at that time was largely in Hindi. You had Johnny Lever, Raju Shrivastava; they were ruling the roast at that time. So I never thought stand-up comedy could be a legitimate carrier option. I used to be the funny guy in the group initially all my family and friends pushed me, saying, You should do comedy; you are really funny, you will be able to do it.  And I was scared as making your friends and family laugh is easy, but to go ahead and do it in front of people who don’t know you, is tough, so that’s when I actually participated in Vir Das’s Amateur night. He used to do this open mic competition for new comics and people who wanted to try out, and the 1st time I did it, I ended up winning it, so that gave me the confidence that waits I can go in front of 200 people who don’t know me and I can make
them laugh. So I think it was the support from the friends and my family and obviously winning this that gave me the initial push to go ahead and do stand-up comedy, and with the years passing by as we got better at it, you have the comedy stores that opened up here you know you got more confidence going up on stage and doing it, and then comedy didn’t just become stand-up comedy it sort of offshoot into a whole lot of things like social media right now is full of comedians who don’t only do stand up comedy but also content creation and that for me the initial burst that I needed and rest is history.

What is your biggest strength as a comedian, and where do you feel it benefits you in everyday life?

Well, I personally think that every comedian obviously has his/her own niche or forte. I have realized over the years doing comedy that I love saying stories because even in real life, I am telling stories to my friend’s family, and that is what I want to sort of like to translate on stage. For me going up on stage and performing is me sitting with my friends in the living room and chatting; that’s the vibe I go with. So whoever comes to watch my show always has pointed out that the way I do my stories is a lot of fun. So that’s the thing I use most in my set. Secondly, I think for me, both my comedy journey and my acting journey started at the same time, and they both are beneficial to each other. So the day I have a good show, and I am shooting that day after, I kill it on set because I have already come with that high of having done a good show. Similarly, when I have acted on a show or a film, I come back, and automatically, my comedy becomes better because I use a lot of acting skills and abilities in my set. So both these
things really work well for me, and I think for every comedian have the biggest benefit of doing comedy is that you are able to take everything in your stride.
The biggest advantage of doing comedy is that you’re always laughing; you’re always used to taking all the most depressing situations and turning them into comedy. For example, if I have something weird that has happened to me in real life that I’m very sad about, like a bad show, I end up taking that, making it into a comedy set, so it works really well for me both ways. 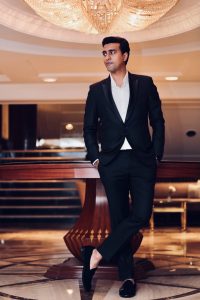 What is the story behind the creation of Vicky Malhotra?

Well, everybody had asked me this question, and it’s funny because I think it was about five years ago when I was honestly a little stagnated with what I was doing. I wasn’t having fun; it was feeling very repetitive and monotonous, and I wanted to instill some new drive and energy in my profession, in my career, and that’s when my then manager said, you know a lot of people do characters and since you are good with characters why don’t you try doing a character and I had already done Vicky in some shape or form in my set somewhere, so I just decided okay I’m gonna get up one day and I’m gonna do this character because I spent so much time going for auditions that I know this specific type of person really well and I literally woke up one morning I went to google and I type Punjabi male model and a hundred pictures show up, I saved all of them, and I went on Snapchat they have face swap app on Snapchat, so I started using that, and this guy at number thirty-two fit my face perfectly, and something about it just appealed to me, and I was like, you know what? I’m gonna go ahead and use this, and I started doing Vicky, and before I knew it, it just blew up and became this sensation which is great for any performer right like something you want to do just catches, everybody’s fancy, and everybody’s talking about it, and Vicky became an instant rage so to speak because somewhere down the line everybody related very hard to Vicky because we’ve all met, seen or know a Vicky in our lives and it was me putting it out in front of them. In fact, some of the biggest fans of Vicky are women, you know, because they understand that I’m not trying to be sexist I’m showing you what those guys are like through Vicky.

So, yeah, Vicky has been the biggest boon to my career because it got a lot of people talking about it, and a lot of people were introduced to other stuff I do because they found me through Vicky. So yeah, I have created a bit of a Frankenstein monster to a point where people are like even in my show, they come and say like When is Vicky coming And I have to tell them, Guys, I am Vicky, okay? It’s not a separate person but yeah, Vicky has been great for me.

Well, Ricky Gervais, hands down. To be honest, though, when I started watching English comedy back in the time, like 2004-05, it was Russell Peters. He was sort of responsible for a whole lot of people from India to get acquainted with English stand-up comedy because he was a guy who looked like us who was doing comedy. So I mean definitely a lot of peoples 1st exposure, including mine, could&’e been Russell Peters, but as you get into the field and start watching more and more, your horizon broadens, and for me, Rick Gervais is fantastic because he is somebody who does not give a shit about anybody or anything he goes up on stage speaks his mind, and he speaks it
beautifully with so much strength and truth in what he speaks that you’re not just
watching it for the comedy you’re watching it for his life lessons for his point of view on things so 100% Ricky Gervais for me over Russell Peters.

WARDROBE IS THE NEW BOUTIQUE With Benafsha Soonawalla

Join our Newsletter to recieve the latest promotion and updates